1 percent growth a day on Cryptorg

Hi guys,  in this video I’m going to answer several typical questions about CRYPTORG. For example, what to do with pairs, which are drawn down, ect.? In this case, do we need to change bots, change the deposit’s interest rate and so on?

How bots work on Cryptorg 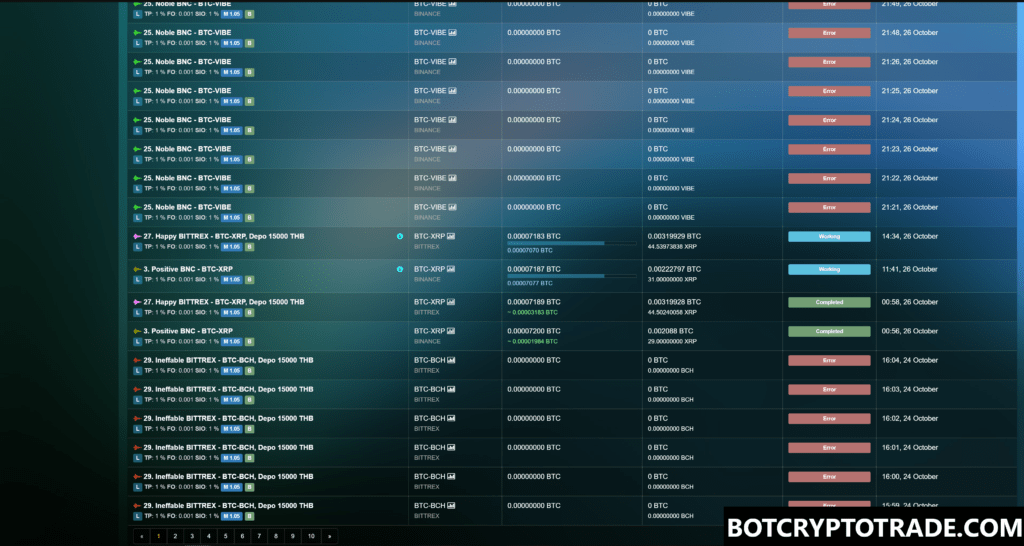 I’d like to say, firstly, that I have both idle and working bots on CRYPTORG. To make work on analytics, you should turn off coin-acquiring to avoid fees. My analytics was not working ‘till I turned off my coin fees.  Let’s go to the analytics section and review my recent deals to understand how it operates. This is important for working on BINANCE or KUCOIN.

The question is “Why are there deals which get closed, despite of its low price, for example, there are deals that results in 14 cents, but another makes $3? “. The problem is that when the currency goes down, the robot does well due to safety orders. It exposes one more safety order, once more and so on. That’s how it scores positions. When the currency goes back, it closes these positions and this brings you more profits. Imagine that the same bot, on Bitcoin—BTC-XRP—for example, brings $0.1361. Then just check BTC-QKC by itself, the previous brings $0.0645.

The marker can go in the opposite direction, then the robot will pick up positions, and then it’ll close the deal, and it’ll result in more profit. You see, yes? And then another deal gets closed. The same can be seen below. Trades can go on for several days and then close later. This is normal.  If the robot are in drawdown—it doesn’t matter. There are two things that you can do—wait, or you can add cash your deposit and even add another on another pair, if you’re lacking in cash. 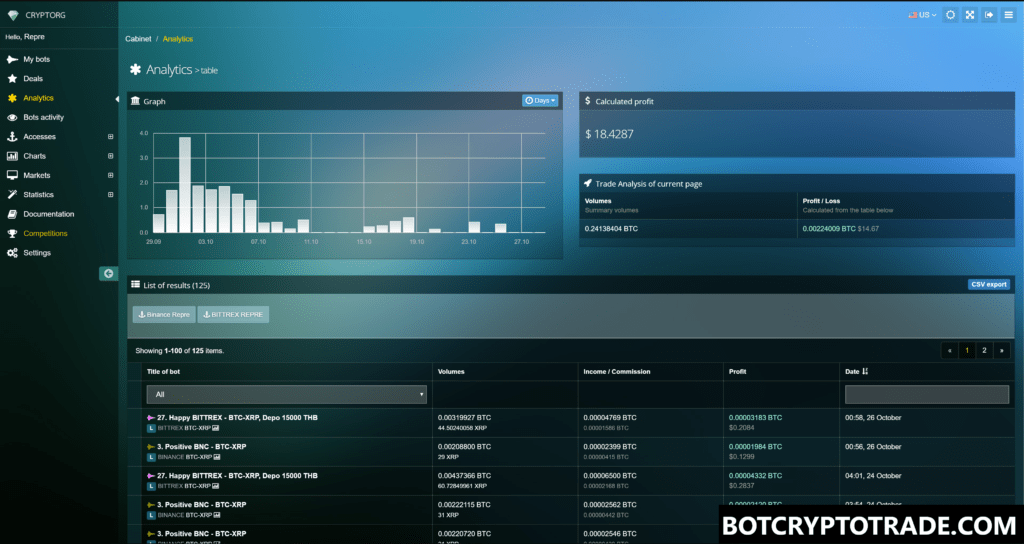 Considering the statistics and analytics on CRYPTORG, let me tell you more about it. I have a deposit on BINANCE and it’s about $1000. Let’s look at the analytics. Here, let’s look at the dates—from 18 till 19 October, for example. So, we see that there’s an income of around $0. 1361.That’s a little bit more than 1 percent.

Let’s check some other days, for example from the 16th till the 17th of October. It’s around the same income and 1%. So, if we do not touch the system, it’ll bring you 1%. It all depends on your patience. Because some people say “Okay, my robot has gone down”. I say that it does not always work or always give you income.

If you’ve been sitting still, but it still works and brings you income and won’t go down, you would not have such big deals. Speaking about big deals, $1-3 isn’t such a big deal, but comparing the with first bets it’s okay. Suppose that when the positions are closed, it closes with a bigger income. You can look at it here. Let’s see how many deals were completed. Check back again on the 18th till the 19th of October. What’s the amount? Not so much—just few deals.

Special setting of the bots on Cryptorg 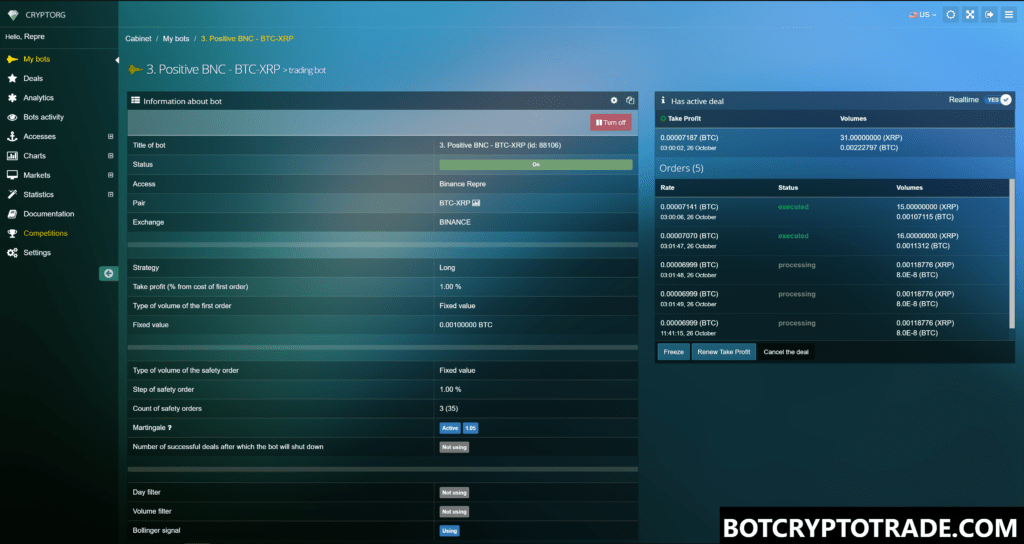 About the bots’ settings. I am experimenting at the moment, by setting the martingale as one to one. In fact, I have another and it’s working on 1:0.5 There is Take Profit of 0.7 everywhere in my account. So, the settings are different and I am still experimenting. Safety order becomes exposed depending on the price deviation of a few cents. Yes, there are different pairs, because I’m making different trades. Here, you can see my deals, which are currently open. Here, you can see that I’m working on another deal.  There are deals that are still going on from last week. But it doesn’t matter, I am still waiting, it’ll all get better when the currency goes up. Or Bitcoin will go down and so on.

You can go to CoinMarketCap, and I would like to give you some advice. Initially prices are in USD. You can see that the whole stock is red today. Refresh it. (00:06:26) It’s mostly red. But you see that some currencies have gone a few % up, but some have gone down. If you want to choose some pairs regarding BTC, you should choose Bitcoin here and you’ll see a dropdown of others regarding Bitcoin. Some drops 4% or 5% today. The stock is red. (00:07:00) You can choose these currencies.

Bitcoin drops—they rise. But notice that when Bitcoin goes up again, these will drop. This is probable. So, if you choose definite pairs, choose ones which will rise relative to Bitcoin dropping. If you trade in pairs with BTC, try trading with Etherium, choose ETH and you will see. It will maybe help you make some extra cash from BINANCE or KUCOIN.

This was just some little tips for using CRYPTORG. You should understand that this isn’t magic that will result in fast cash, guys, it is stocks.  Currencies will not rise and stay there permanently, especially crypto-coins, they are usually volatile. They go up and down. So, if you are scared to trade, you won’t lose your deposit here; you’d have one crypto to grow and another invested in a stock. You’ll get to decide when to wait, add bots, put more in your deposit and make deals. 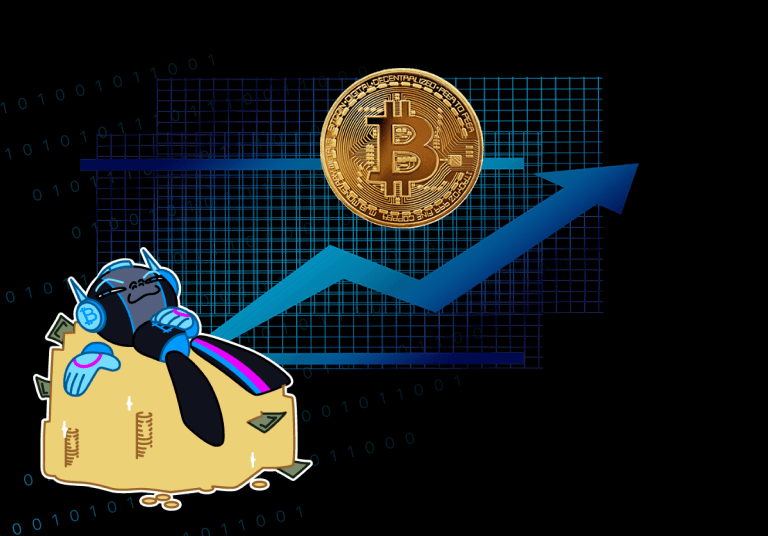