Bitcoin and Altcoins Forecast for September 2021

Hello everyone, friends. In the first part of this video, I will provide some recommendations for altcoins that should rise in September 2021. In the second part of the video, I will tell you a few of my ideas on bitcoin and what awaits us – growth or decline. The video will be interesting, click “I like it”, subscribe to the channel, and let’s get started.

Altcoins that will rise in September 2021

Friends, in the cryptocurrency market, we have once again entered the altseason, that is, the growth of most cryptocurrencies along with bitcoin. Now is the time to buy some old or new coins, and keep in the medium or long term.

However, I warn you right away that this is not financial advice and I do not guarantee and am not responsible for your actions and decisions. All that you do it at your own peril and risk, so you should invest in cryptocurrency only those funds that you are ready to lose. So let’s get started.

The first coin is the “Moonpot’s” protocol and its native POTS token. The project is a native open source that was created by the Beefy Finance team. Moonpot’s was created to expand the Beefy project and reward investors with high-yielding staking (120 to 300% APY) and cash prizes of 48,000 USDT or more.

The lottery is drawn once a month. POTS hasn’t been listed on major exchanges yet, so the token can only be bought on pancakeswap and Hotbit. There is a strong chance of multiple growths as new project partnerships and listing on Binance are expected in the future. More details about POTS will be in a separate video.

The second coin is “Bella” Protocol. This is an aggregated UI for other sector Defi coins that were launched first on Binance Launchpool in September 2020. The token has a small capitalization and it almost did not grow normally over the year, so this project has every chance of flying to the moon.

The third coin is “Keep Network”. This is also a Defi project to tackle cybersecurity issues. It was listed on the Coinbase exchange, but this token has not yet shown itself in any way. There is every chance of great growth in the future.

The fifth coin is “XRP”. A fundamental and old coin that is undervalued. Yes, she had problems with the regulator and lawsuits, but the creator and owner of Ripple were able to solve all these problems, so it is worth waiting for further growth. In addition, XRP successfully consolidated above the $ 1 level and almost did not fall for a long time. 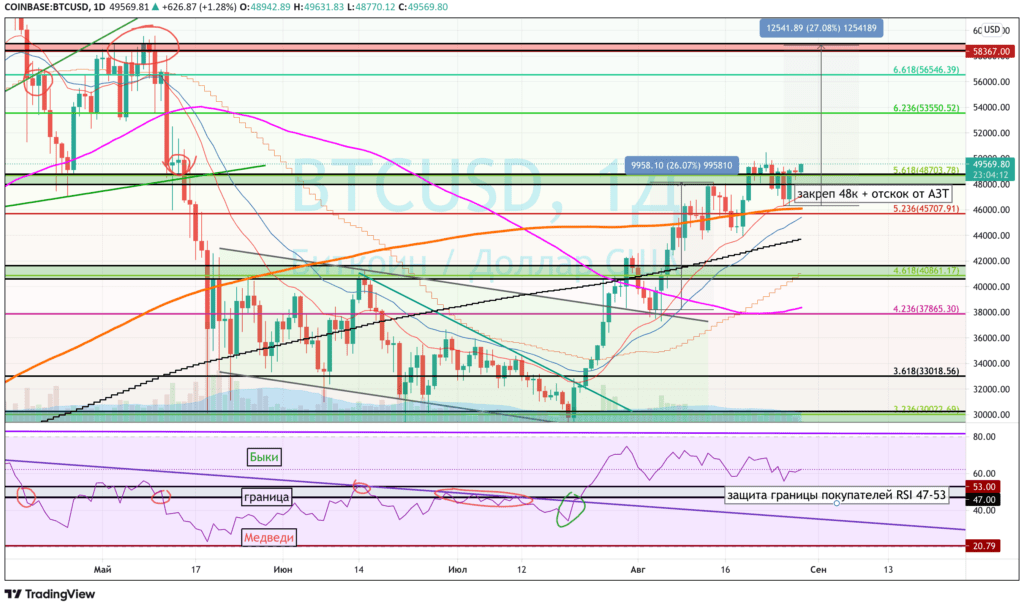 In the second part of the video, I want to share the Bitcoin forecast. Bitcoin is growing and this is nice, because altcoins are also starting to rise, and some coins even show new heights that were before May of this year. BTC already reached 60,000 USDT, then there was a correction stage when many were already disappointed and began to sell their assets cheaply.

Bitcoin is now ready for new heights, although there may be another correction. When Bitcoin goes above $ 600,000, you will need to sell it in order to be ready for a bear market and buy back the cryptocurrency cheaper. If we look at the chart for August 29, 2021, then the previous day (August 28) was closed above the resistance of $ 48,000, so the bulls are ready to buy back further.

Factors behind the growth of Bitcoin and therefore altcoins:

+ We rebounded well from AZT at D1 and protected the border of buyers RSI 47-53.

+ On the market, with positive and rising liquidity, altcoins went further into a bullish trend.

+ Working out bounces on altcoins.

+ The dominance of the cue ball falls, below 44% the altcoin holiday will begin.

We expect further on bitcoin:

3. Working out analytics on Ether.