Hello traders. The topic of this video is working with crypto deals on 3commas. This site for effective manual and automatic trading is constantly improving and new features appear that I want to talk about. Also, some users have problems, questions, and not understanding how orders and deals work in the system, and here you will find answers. Let’s go! 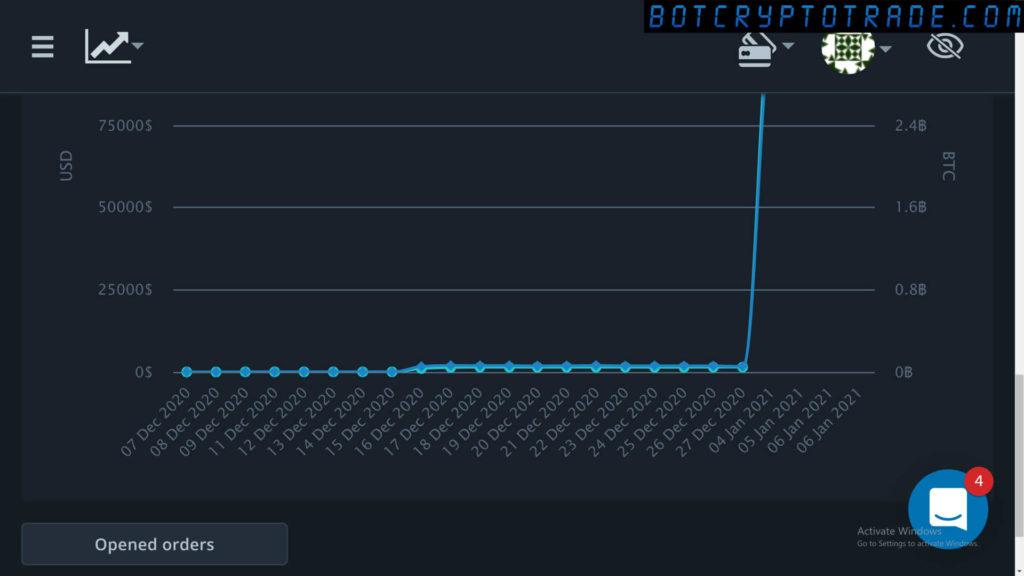 If you trade in the spot and futures markets at the same time, you may find it helpful to keep track of all your trades at the same time. For example, some position was only partially fulfilled, or you decided to cancel the Safety Orders for bots. For this, you will need to use some tool on 3commas, which shows all positions in the futures market or spot and any Limit Orders with Take Profit or Stop Loss.

To view your trades, go to the “My Exchanges” section of the 3commas website, and click on the “Eye” icon. Then scroll down to the bottom of the web page and click on the “Opened Orders” button. Here you can cancel your Orders and close positions by the Market price. To view the deals made by bots, open the “My deals” subsection in the “DCA bots” section. Expand the Filters field using the button in the right corner.

Additional 2 fields will appear, where you can sort information by crypto exchange or bot name. Also, pay attention to the “History of deals” button, clicking on which will open the statistics of all already completed deals with Take Profit, Stop Loss, and canceled deals. In the item “Active deals” general information about unsuccessful and successful deals. Green color – the deal was successful with a profit. Red color – the trade was unsuccessful with a loss.

Income from completed trades is shown in 3commas in USDT and BTC. In the “Balances” field, you can see how much funds are involved in Smart Trade deals or bots, and how much free funds are available. Active trades can be sorted by clicking on the sort icon or column name. There is a profit/loss indicator opposite each trade – the average trade entry price, the current coin price, and the required price to close the trade with a profit.

Information about deals in crypto 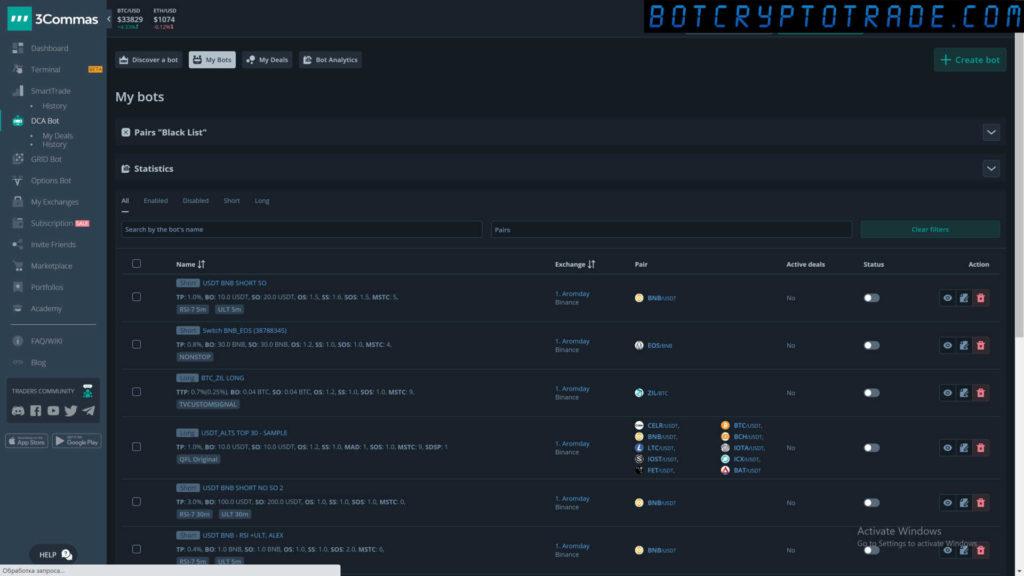 It is very convenient that all trades with Take Profits, Stop Loss, Conditional Orders for entering a position are shown on the chart at 3commas. I analyze technical analysis and a chart, you can plot entry and exit points of deals directly on it! When you click on the name of the bot, all information about it will open, including profit or loss during its operation. When you click on the bot ID, a table will be displayed where Take Profits and Safety Orders are visible.

The “Cancel” button removes any orders for a deal on the crypto exchange and stops the bot from working on it. The bought tokens will be still on the exchange, but 3commas will stop working with them. In completed trades, canceled trades are displayed without loss/profit calculation with the “Canceled” status. The “Sell by market” button sells all bought tokens by the market price and the deal is closed. The calculation of the loss/profit is made and the deal gets the status of completed.

The “Switch” button is used to switch the Long trading bot to Short, and vice versa. The “Average” button helps to improve the consequences of unsuccessful entry into a trade. Let’s say you buy Bitcoin at 10,000 USDT, but then the price of Bitcoin drops to 8,000 USDT. By clicking on “Average”, you average the sale price of the token to 9,000 USDT, and then, upon completion of the deal, the losses will not be $ 2,000, but $ 1,000.

In the case of additional averaging, losses can be avoided or even a profit can be withdrawn. The “To SmartTrade” button switches the trade from the bot to the SmartTrade trade with the same settings that were specified when the bot was created. In the “Status” column, you can disable or enable the bot. When a bot with open deals is disconnected, it will first complete them and only then disconnect and stop opening new deals.

Problems with deals in crypto 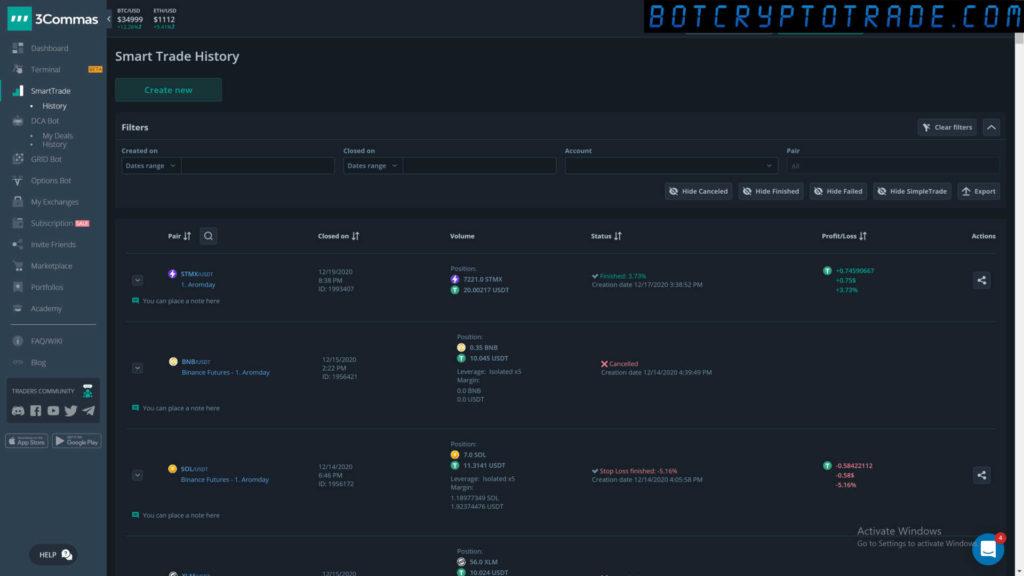 Sometimes when trading cryptocurrency through the 3commas service, some users may have problems or questions. 1) Why was not a deal opened or Take Profit triggered? The first reason is that it depends on the type of the used Order – Limit or Market. The Limit Order does not always work as it must be completely filled. A Market Order is always triggered, but not at the best price.

The second reason is that you see the Last price on the chart, which is higher than the Bid and lower than the Ask. For the greatest trader’s profit, when selling coins in Long, 3commas uses the Bid price for Take Profit. And when buying coins in Short, the system uses the Ask price for Take Profit. The third reason is that the Trailing function often leads to slippage and non-execution of orders. Despite the fact that Trailing helps to increase profits, it is better to turn it off in serious trades.

2) Why didn’t my Stop Loss work? This includes the same 3 reasons to have been mentioned above. Use market orders to accurately trigger your Stop Loss. Also, pay attention to whether you have set the Stop Loss trigger time in the “Stop Loss Timeout”. 3) The system places a sell order at a lower price than the one set by the trader. Indeed, this situation happened sometime at 3commas.

This is done to ensure that your trade is closed. And in fact, the token is not sold at the lowest price, but only at the current price, which is determined by the crypto market at the time of the transaction. 4) A trade was opened at 3commas, but it is not visible on the exchange. The point is that the system does not create a sell order during the execution of a deal. Orders for Take Profit and Stop Loss are triggered only when the price specified by the trader is reached.

I told you about working with 3commas deals and bots, how you can view the necessary statistics on deals on the spot and futures markets. This is how many and when deals were made, how many losses and profits in general, which bots are effective and which are not. And I also answered frequently asked questions and problems of users. This video is complete and keep in touch until the new videos on botcryptotrade.com